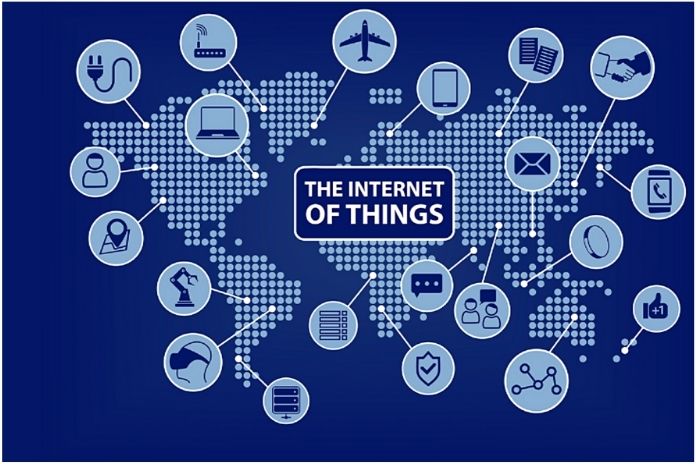 The Internet of Things has become one of the most important technology trends in recent years. It finds its way into our households and everyday life and plays at least as important a role in the industry. What is hidden behind the term and what you need to know about security risks and measures to protect against attackers can be found in the following article.

Definition: What Is The Internet Of Things?

The Internet of Things (IoT) refers to a network of physical objects. These objects (“things”) can be either a refrigerator from your household or a complex industrial robot.

The special thing about these objects is that they are equipped with sensors, software and other technologies that enable them to exchange data with other systems and devices via the Internet and link them.

This description makes the core issues of the Internet of Things clear. It is about physical objects that receive a certain “intelligence” through sensors and software and communicate and collaborate via the Internet.

Goals Of The Internet Of Things

The Internet of Things can have different goals. The goals vary depending on the IoT application. The focus is on a certain form of optimization for all goals.

A few target values ​​are listed below.

The boundaries between real and virtual worlds gradually reduce to perhaps even eventually dissolve completely, which can be seen as an overarching goal of the Internet.

In practice, this would mean that every real object becomes part of the Internet of Things and continuously makes its status information available on the Internet within the framework of networking.

Technologies Behind The Internet Of Things

After looking at what the Internet of Things can look like in practice, we would now like to show you which technological advances have made the Internet of Things possible. Access to cost-effective and energy-saving sensor technology is an important factor. This made it possible for a larger number of manufacturers to work in the IoT environment. In addition, the end products have become cheaper, which means that they can address a large group of buyers.

The increased availability of cloud computing platforms is also contributing to IoT development. It enables companies and consumers to access the infrastructures they need to be able to scale up. The administrative effort for the user or the company is kept low.

Products like Alexa also show the influence of artificial intelligence (AI) on IoT technology. Because only AI enables, for example, the processing of natural language, which has had a particularly positive impact on use in the private sector.

The further spread of the Internet of Things is additionally supported by the expansion of 5G, as 5G offers both the required speed and can cope with the steadily increasing volume of data traffic.

Risks Of The Internet Of Things

As previously described, more and more devices are being networked through the Internet of Things. However, this networking creates new security risks.

What Is A Botnet?

A botnet is a collection of hacked devices connected to the Internet. They serve as a multiplier for individual attackers. Often, such botnets aim to disrupt their victims’ systems, completely paralyze them or gain access to them.

You may now ask yourself: What are the effects of such hacker attacks in the IoT environment? Compared to attacks on the classic IT network, attacks on IoT devices can have far more dramatic results. A successful attack could paralyze a completely networked production or, in the worst case, even cost human life if, for example, a robot can no longer be controlled or a connected car is manipulated.

In addition, it should be made aware that security gaps in IoT devices can also give possible hackers access to the secured networks. It would help if you, therefore, thought about how to confirm them before integrating IoT devices.

How To Secure The IoT

The following measures give you an insight into how you can secure your IoT.

Outlook: Our Future Will Be Based On Data

While 30 billion networked devices are assumed for 2020, the forecast for 2025 is significantly higher. More than twice as many IoT devices, namely 75 billion, are forecast for 2025. These figures make it clear that the Internet of Things will continue to grow strongly.

The strong growth is not surprising when we consider that the future of the world will be data-based. Data is known as the oil of the end, and we all know how great an impact oil has had on civilization over the past few decades. Jobs from the data science environment are also being sought more and more to make sensible use of the amount of data. The Internet of Things fits in perfectly with this change.

What does that mean for the future? We will probably live in smart cities, be treated in smart hospitals and get around with connected cars. But how extensive this change will be and how quickly it will progress remains to be seen.

Also Read : How Is Artificial Intelligence Used In Digital Marketing?

Tech Buzz Updatehttps://www.techbuzzupdate.com
Techbuzzupdate is a globally recognized tech platform that publishes content related to various aspects of technology such as digital marketing, business strategies, reviews on newly launched gadgets, and also articles on advanced tech topics like artificial intelligence, robotics, machine learning, Internet of things, and so on.
Previous articleHow Is Artificial Intelligence Used In Digital Marketing?
Next articleWhat Is A Blockchain? The Explanation For Beginners