All The News Of The iPad OS 16 Update 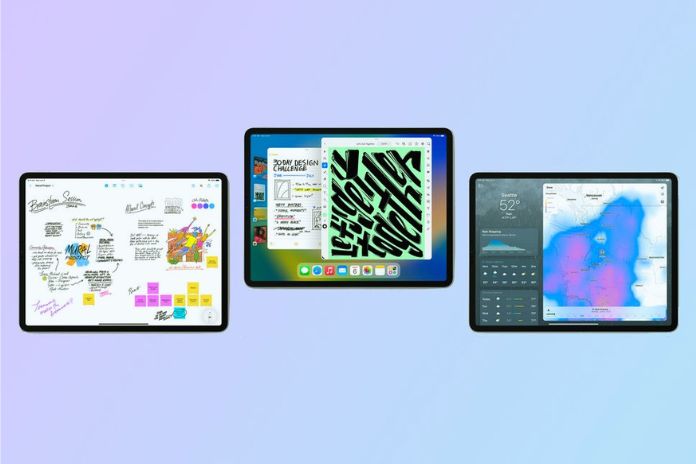 iPad OS 16.1 has been officially released and is already available for download. Let’s find out all the news about Apple’s operating system update.

According to experts, this update aims to make the use of the famous tablet even more accessible and more versatile, simplifying work and improving the multitasking experience. An eye also to sharing and security, which become two central elements of the operating system. Let’s find out more about iPad OS 16.

Among the most important innovations are the new functions of the Messages application, designed to simplify collaboration and file sharing.

By inviting contacts to become project collaborators, whoever receives the message will be automatically added to the shared document, and any changes made will be reported in real-time.

In terms of communication, Apple has made great strides with users of a conversation (or work project) who can initiate FaceTime calls with the group with a single tap.

In addition, you can edit or cancel sending recent messages, retrieve recently deleted ones, and highlight unread messages for later consultation.

The same goes for the Mail application, which achieves better communication management with automatic correction functions, notifications to report any missing elements in the message, and reminders to remind the user to reply to an “ignored” email.

Safari also winks at collaboration, thanks to the new shared panels allowing real-time updates. The App also enables sharing these panels and bookmarks to make the cooperation even more intuitive. Finally, starting conversations with your work groups will be possible without ever having to leave the App.

Passkeys have been implemented on iPad OS 16 to associate the various navigation passwords with the user’s biometric data. Furthermore, the data is never stored on web servers, so any intrusion attempts cannot intercept them.

Thanks to the on-device artificial intelligence, the Active Text function can recognize the writings on the images or videos on the device. It will also be possible to search or translate in real-time simply by tapping on the frame.

On the other hand, Visual Search allows you to isolate the subject of an image and modify it to your liking; also, start a search on the web creating from this detail.

Reference Mode has been implemented on the 12.9 ” iPad Pro: thanks to the Liquid Retina XDR Display; it is possible to obtain better colors and more authentic images even in the most demanding work sessions.

In addition, in devices with an M1 processor, the Zoom screen function allows the user to increase the display’s pixel density to guarantee an improved vision of the contents.

Virtual Memory Swap allows you to use the iPad storage space to expand the memory available for applications up to 16GB for those that require more power.

Finally, thanks to Stage Manager, Apple has redesigned the multitasking experience, improving the organization of windows and applications and simplifying the transition between activities. The user will have complete freedom to manage and customize their work windows, to take care of any project more efficiently.

On newer models, such as iPad Pro, iPad Stage Manager also grants support for external monitors for resolutions up to 6K.

Among the new updates of iPad OS 16 is a new Dictation mode, which allows you to switch faster from voice to touch or handwriting mode with Apple Pencil. It also improved the writing handling with the keyboard and the automatic insertion of punctuation and emoji.

Siri has also been renewed with the implementation of quick commands from various apps and a new, utterly voice-processing mode.

The Home app has been completely redesigned to make the management of intelligent devices and accessories more accessible and intuitive. Compatibility with third-party accessories and platforms has also been improved.

The note has updated the handwriting mode with many settings to make it more precise. I also added the ability to use screenshots in quick notes and to create intelligent workbooks with search filters.

The Exciting is the Handoff function on FaceTime that allows you to switch calls between nearby devices quickly and easily without having to attack. Still, on Facetime, the application has obtained new accessibility tools such as Live Transcriptions, the ability to enlarge the text, and much more.

Finally, Apple has also updated the Weather App that arrives on the iPad completely renewable, with many more features and a look perfectly adapted to the tablet screen.

How To Install The Update To iPad OS 16.1

To install the new operating system update, go to the settings, tap on General, and then on Software Update.

Before proceeding with the operations, the iPad battery level must be above 50%, or the device must be connected to a power outlet.

Also Read: iPad With A Pen: Does It Have To Be The Apple Pencil?

Tech Buzz Updatehttps://www.techbuzzupdate.com
Techbuzzupdate is a globally recognized tech platform that publishes content related to various aspects of technology such as digital marketing, business strategies, reviews on newly launched gadgets, and also articles on advanced tech topics like artificial intelligence, robotics, machine learning, Internet of things, and so on.
Previous articleMarketing Career: What Are The Trends, & How To Identify Them?
Next articleThe Hottest Tech For Gaming In 2022

If you pin a website, you frequently visit the taskbar. You can go directly to it with a double click. This way, you won't...
Read more
GADGETS

Apple will have to adapt to USB-C on the next iPhone: the company will have to give up the Lightning port for the new...
Read more