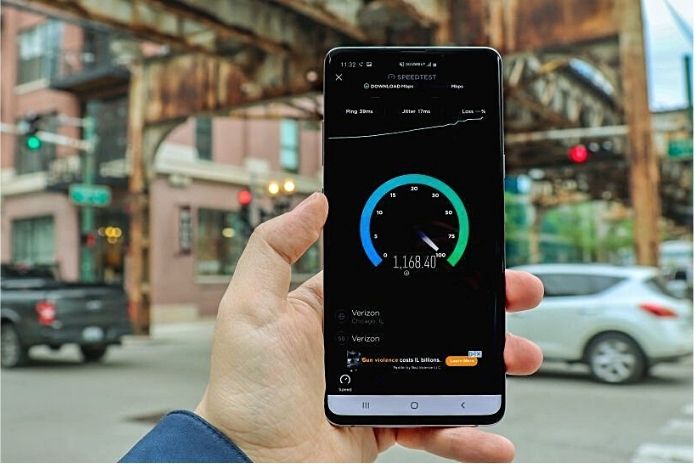 The network providers promise you up to 400 Mbit / s per second in the 4G network (LTE) and more. You can expect even higher transmission rates in the 5G network. However, only a cell phone speed test will reveal how much speed matters on your smartphone. Because the busier the radio cell, among other things, the less Mbit / s you get. We’ll tell you how to do the test.

Why You Should Do A Speed Test

Suffice it to say: The specified maximum speed of the provider is usually only a theoretical value. For example, if you are at a street festival with thousands of people (if this is allowed again at some point), you are far from the possible achievement. Then, depending on how busy the network is, you may even upload simple pictures painfully slowly.

The speed also depends on your smartphone. Older models, in particular, offer a lower maximum transfer rate. But that does not always have to be the reason for a lame Internet: If you are annoyed about slow rates, you should do a speed test and, if necessary, compare it with results from friends to rule out excessive network load as a reason (or narrow it down to it).

On the other hand, you have a new smartphone, a 5G tariff, and are not at a street festival with thousands of people? Well, then the cell phone speed test is also exciting. Ultimately, you want to know how much speed the 5G network (if available at your location) offers you than LTE, right? That can be a lot and makes a test all the more exciting. You may surf faster with your mobile phone than with your landline internet. At least that’s what happened to us: In Hamburg, we already achieved over 300 Mbit / s with an iPhone 12, including a 5G contract.

There are two ways to do a cell phone speed test. The first question here is how often do you think you want to do such a test. You can choose from these methods:

In particular, if you want to check the Internet speed of your smartphone more frequently, an app from the Apple App Store or Google Play Store is ideal. The applications often have several convenience functions. They can also be reached more quickly via a button on your home screen than a website (the address you first have to type into the web browser).

Apps usually also offer you a history in which you can see the progress of your tests. For example, to find out whether the speed at a specific location changes over time. Or whether your WLAN offers the performance for which you pay. Because you can also measure your landline speed with a cell phone speed test.

If you only want to measure the network speed occasionally and do not recognize yourself in the above or similar scenarios, you can also use a website. This saves the storage space on your smartphone for other things. However, depending on the spear test service, the evaluation can be stripped down so that only one of the following values ​​is checked.

When you perform a speed test, four values ​​are usually output. These show you how well your Internet is doing in various activities. And also what activities your network could be suitable for.

Download speed: This value indicates how fast you can download things over the mobile Internet. This is important when streaming videos, for example. Netflix is ​​satisfied with 10 Mbit / s for a full HD video. However, if you want 4K videos, 25 Mbit / s or more is recommended.

Upload speed: Here, you can see how fast you can send data over the Internet instead of receiving it. The higher the rate, the quicker you can, for example, send videos over the Internet to your friends or platforms such as TikTok and Instagram. A high value is also essential if, for example, you make your live stream. For HD quality, around 6 Mbit / s are sufficient. If you want to stream in Full HD, you need at least 10 Mbit / s. However, 20 Mbit / s upload and more are recommended for an even better image quality

The ping: Here, you can find out what the latency of your Internet is like. Low latency means that data packets are exchanged between you and your target server as quickly as possible. Anyone who plays games on the Internet, for example, depends on a low value here. Less than 50 ms (even better: 20 ms and less) are recommended for games that rely on responsiveness. Shooter, for example. Higher values ​​are only acceptable for MMORPGs. From experience: Everything over 200 ms is already very noticeable and will annoy you

The jitter: Here, you can find out how much the network performance fluctuates. The higher the value, the more the speed of the Internet varies. Constant values ​​are essential for streaming and gaming. The latter should you play mobile games online or use your mobile phone as a hotspot for a gaming PC or laptop

There is one thing you should keep in mind during the speed tests: your data volume. For the test, data must be received and sent. You usually have to invest 50 MB or more in a trial.

Are you ready? Well, now we come to the providers where you can do a speed check. There are so many to choose from. At this point, we only provide you with the recommendations of the CURVED editorial team.

Probably the best-known provider for speed tests is Ookla. The fastest server in your area is automatically determined here. You can then see how your device is doing in the trial. If you like it straightforward, you can carry out the test directly on speedtest.net. However, here you only get the download value. The app for iPhones and Android offers you more functions. The applications also have a video test function that recommends a maximum streaming resolution based on your network speed.

Disadvantage: The app shows you advertisements now and then. But that’s not annoying, as we found out after several runs.

Much praised in the app stores: Meteor Speed ​​Tester. The provider does not have a website for the speed test. You have to download the app from the Google Play Store or the App Store for iOS. Excellent: The application classifies your speed directly and shows what quality you can expect from well-known apps.

Yes, there is even an app from the Federal Network Agency. Quite officially. If you choose to do this, you can do your fellow human beings a favor as well. Here you have the feature to report dead spots. Those that Vodafone, Telekom, and o2 now want to eliminate together. You can find more information in our article on whether the o2 network will still be wrong in 2021.

Unsatisfied With Your Internet?

You have carried out the cell phone speed test and are not enthusiastic about the result? Then you should take a closer look at the networks of o2, Telekom, and Vodafone. Not every provider delivers the same service at every location. In parts of Hamburg, for example, we have seen how a cheap blue tariff in the o2 network paid significantly more speed than a Vodafone tariff that was four times as expensive.

So if you want to get into a better network, you should find out about the provider’s network coverage. It is easier if your friends have a contract in one of the other networks. Then you can ask them to start a speed test at the same place as you.

Attention: The result may differ depending on the smartphone and tariff used. For example, if your friends have a much more up-to-date mobile phone with a 5G tariff, but you have an older model with LTE, the outcome of the test is clear in advance: The person with the latest technology usually surfs much faster.

The best option would be to test the cell phone networks yourself with your smartphone. Unfortunately, Vodafone and Telekom currently do not offer this option. Only CO2 has a test card. For a short time, you can use it to try out the Telefónica network for free without having to slip into a contract. Learn more about the test card here. With a bit of luck, the other providers could soon offer a similar test option. But nothing is known about this yet.

Also Read: Which Phone To Buy? To Find You The Right Smartphone

Tech Buzz Updatehttps://www.techbuzzupdate.com
Techbuzzupdate is a globally recognized tech platform that publishes content related to various aspects of technology such as digital marketing, business strategies, reviews on newly launched gadgets, and also articles on advanced tech topics like artificial intelligence, robotics, machine learning, Internet of things, and so on.
Previous articleNew Work: 5 Trends That Will Become Essential For Companies In 2021
Next articleiPhone 13: This Bang Feature Is Probably Only For Emergencies

To be successful on LinkedIn and achieve the desired results, it is necessary to increase profile visibility and the Social Selling Index: how to...
Read more
APPS & SOFTWARE

WhatsApp and the new feature to recover deleted messages: how to do it and get Accidental delete on your device. Finally, WhatsApp has introduced...
Read more