Low-Code Platforms: Soon, No More Code At All? 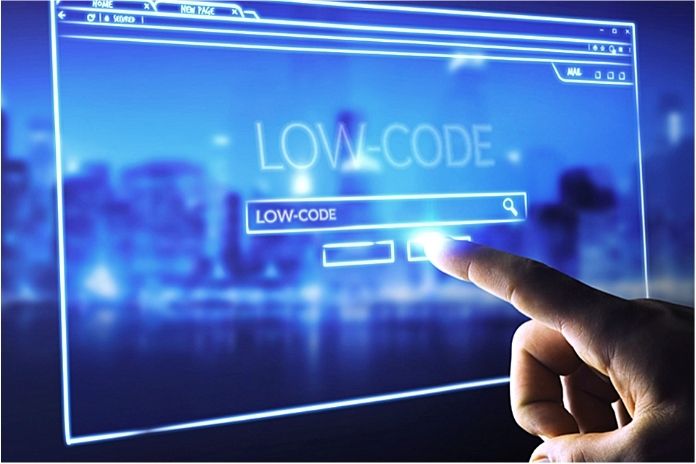 Companies want more time savings, and developers want to write less code. As a result, low-code platforms are becoming more and more attractive. But what exactly is low code? What are the advantages? And what are the challenges associated with it?

What Is A Low Code?

The term low-code is a relatively new concept. In 2014, Forrester conducted Research on the term for this particular type of software development. First of all, low code means “little code” or “little programming.” It is about software that should avoid 100% programming. Visual design tools are used to create a user interface, business logic, and data model. Low-code platforms accelerate development and deployment times, as only a small amount of up-front investment is required for setup, training, and deployment. Low-code platforms are usually licensed on a subscription basis (monthly subscription). An example of a low-code platform is a content management system like WordPress.

How Did The Low-Code Movement Come About?

The aim has always been to simplify the operation of a complex system. In the example of WordPress, it is the creation of websites. The low code movement started in the 1980s. At that time, the trend began with the so-called “Fourth Generation Languages” (4GL). The term comes from software development and describes the programming language from the fourth generation. 4GL aims to use as few lines of code as possible. The 1GL denotes the machine language. In principle, this is binary and relatively confusing. With the 2GL, so-called “mnemonics” are assigned to the binary codes. The source text is converted directly into executable machine language by an assembler. The third-generation (3GL) deals with translating the language into the next lower level. Examples of this are the programming languages ​​C ++, Java, or JavaScript. The individual generations are summarized as follows:

What Are The Requirements For Low-Code Platforms?

There are four essential characteristics for low-code platforms:

One feature is the ready-to-use templates, plug-ins, and widgets that are available to be used again and again. However, some private app stores can also be integrated into low-code platforms. This allows company-specific IPs to be distributed to development teams for reuse.

Provision On A Cloud Basis

With some low-code platforms, it is possible to manage applications in the preferred cloud. This enables immediate availability and the support of extensive implementations.

Support After The Development Phase

Low-code development platforms are typically designed to support the entire application lifecycle. That means from the design to the provision to a possible resumption or continuation of projects.

What Are The Challenges Of Low-Code Platforms?

The introduction of low-code platforms should be well planned. It is recommended to conduct special training during the introductory phase. Developers or highly trained workers can only use some platforms because they are very complex. That is why it should be specified here how requirements can best be implemented in the company. The issue of vendor hole-in also plays a role that should not be neglected. Some providers have access to the entire project at any time, including the open-source libraries and the code used. Other providers, however, charge additional costs when exporting the source code. With some providers, this is not even possible. It would be best if you also considered the license model. What are the costs for ongoing operations, and how many users are required? This is just one of many questions to ask.

What Are The Advantages Of Low-Code Platforms?

One advantage is the efficient collaboration between the individual departments. In addition, the backlog can be processed in development teams through low code and delivered more quickly. There are no additional developer resources. Furthermore, the platforms support resource bottlenecks and increase the software quality. This is done because test cycles can be carried out extensively. The higher software quality also reduces maintenance costs during operation. Another advantage is that both the complexity and the susceptibility to errors of the source code are reduced. This allows less qualified developers to take on and implement tasks quickly.

Tech Buzz Updatehttps://www.techbuzzupdate.com
Techbuzzupdate is a globally recognized tech platform that publishes content related to various aspects of technology such as digital marketing, business strategies, reviews on newly launched gadgets, and also articles on advanced tech topics like artificial intelligence, robotics, machine learning, Internet of things, and so on.
Previous articleB2B Marketing – Tactics And Trends For The Perfect Strategy!
Next articleOnline Marketing: 6 Trends You Should Watch Out For In 2021

Five mistakes that are often made when using Excel spreadsheets. What are they, and how can they be fixed? Many of our readers work...
Read more
APPS & SOFTWARE

If you pin a website, you frequently visit the taskbar. You can go directly to it with a double click. This way, you won't...
Read more