The 10 Biggest Myths About Artificial Intelligence 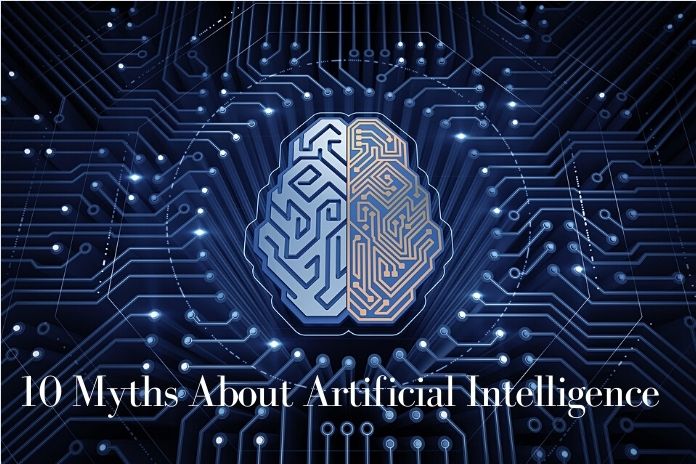 Artificial Intelligence (AI) is one of the hottest topics of the economy and an integral part of digitization. But AI is not a new topic; it was discussed as early as 1956 at a conference at Dartmouth College. Meanwhile, this topic determines the everyday business of numerous companies and is an approach that is intended to contribute to the automation of simple processes.

Numerous myths could arise around artificial intelligence, so that we will give you an overview of the ten most significant errors and misunderstandings.

Artificial Intelligence Is A New Topic

As noted in the introduction, the idea of ​​developing an AI is not a new one. As early as 1955, the term “Artificial Intelligence” was coined by Professor John McCarthy. McCarthy did his first basic research at Stanford University. In the following years, there were always new developments, which often led to disillusionment.

Many people are afraid of artificial intelligence and expect it to take on the traits of a human counterpart. Many think that this AI can think for itself and solve problems like a human. However, this assumption is wrong because an AI can only carry out what humans have intended through programming.

However, the algorithms used are well advanced, and machine learning is also becoming increasingly important. Even today, it looks as if you are dealing with human intelligence. The fields of application are diverse and include image recognition, language processing, or the control of complex machines. All in all, it is still a subjective impression.

AI Is Identical To Machine Learning

Many users understand artificial intelligence as an umbrella term. This includes all technologies that give the impression of human intelligence. One of these technologies is machine learning. With this technology, existing algorithms are constantly supplied with new data. This constant data supply aims to improve the output continuously. This is already taking place today in the context of autonomous driving or in customer-specific advertisements. Furthermore, the topic of AI includes developments such as deep learning, natural language, or cognitive processing.

The Use Of AI Will Make Human Workers Obsolete

Employees, in particular, fear the effects of artificial intelligence. A look at history shows that technical revolutions have always created new jobs. A similar development is also expected in the context of digitization. This scenario occurs primarily when people work together with machines and software.

This includes, for example, learning new skills that are required for working with intelligent systems. In the resulting scenario, humans will collaborate with AI ​​and increase productivity. There will be no jobs in the context of digitization, which new and specialized jobs will replace.

AI Will One Day Rule The World

Science fiction, in particular, deals with intelligent robots that one day will subjugate all of humanity. Meanwhile, similar news haunted the media. However, what is neglected in these scenarios is the fact that machines do not have properties such as morality or free will. Should these be developed in the future, they correspond to the ideas of the programmers.

Thus machines and robots will never build their motifs. Experts, therefore, see a need for a healthy balance of optimism and pessimism towards new technologies. News from the media should not be accepted as the status quo. Instead, investments must be made in realizable possibilities. Companies, in particular, must have the potential to Use digital transformation as well as to positively change existing processes through the use of AI.

The appointment of a chief AI officer and the definition of an AI strategy is not necessary. It is more important in defining a sound business strategy. In the course of the 1990s, graphical interfaces (GUI) gained importance. Still, no company appointed a GUI officer. In addition, no company followed a GUI strategy.

In the end, however, many companies have developed appealing graphical interfaces. The core of this strategy was the strategic direction of the company. This promotes the realization that an AI strategy is not a mandatory condition for successfully implementing AI in the company. Rather, Artificial Intelligence will have an impact on all departments of a company.

The promise that buying an AI will solve all business problems is pure marketing. The market is currently growing, and companies like IBM and SAP are working on developing Artificial Intelligence. Weissenberg’s experience with Robotic Process Automation also shows that business processes that can be standardized using RPA can be successfully automated and optimized. Nevertheless, the topic must be viewed differently because AI is a bundle of different technologies. Accordingly, the AI ​​that is suitable for the respective area of ​​application should always be purchased.

There is no question that AI plays a vital role in digitization. But the assumption that an AI will change the entire industry is simply utopian. Instead, every company should have its requirements for an AI. Accordingly, it is simply better to use other companies’ best practices and not develop your own AI. In addition, AI should not be used across the board at the beginning but in individual areas of the company. In an AI experiment, it is also essential to pay attention to a corresponding business case, as otherwise, no specific benefit can be analyzed.

According to industry experts, focusing on an AI-rich platform is currently associated with a high level of risk. This is mainly due to the rapid developments that characterize the entire industry. Today’s market leader can lose this position in a few years and offer an outdated solution. Current platforms are characterized by a high degree of complexity. Should a change come into question later in time, there is a risk of vendor lock-in.

This is a simple misjudgment that assumes that the development of artificial intelligence has a linear course. Instead, the issue of intelligence must be viewed in a differentiated manner. Computers are already far superior to humans in some areas. Performing arithmetic operations can be mentioned as an example. In contrast, a computer cannot depict creativity, emotionality, or strategic thinking. AIs are currently unable to learn these properties. A corresponding development is not to be expected in the following years either.

Outlook On The Development Of Artificial Intelligence

Digitization and Industry 4.0 are without question megatrends. AI is an essential part of this development. The development of artificial intelligence is picking up speed and will influence everyday work in the future. In particular, they can automate simple processes. This sometimes leads to a decrease in the need for low-skilled personnel. However, the need for specialist staff will increase at the same time.

Tech Buzz Updatehttps://www.techbuzzupdate.com
Techbuzzupdate is a globally recognized tech platform that publishes content related to various aspects of technology such as digital marketing, business strategies, reviews on newly launched gadgets, and also articles on advanced tech topics like artificial intelligence, robotics, machine learning, Internet of things, and so on.
Previous articleDefinition And Explanation: What Is Machine Learning?
Next articleAI In Manufacturing – From Science Fiction To Reality: Robotics In The Smart Factory