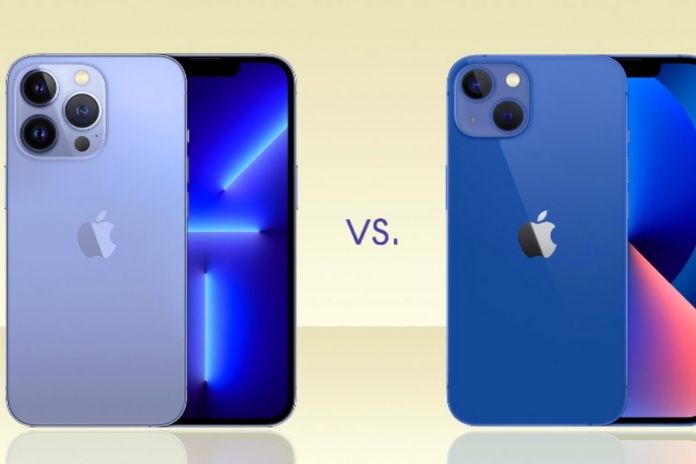 The iPhone 13 Pro and iPhone 13 Pro Max are pretty similar. Nevertheless, there are also differences that we want to show you in a direct comparison. An “iPhone 13 Pro vs. Pro Max” will clarify which smartphone is better for you.

The differences between iPhone 13 Pro and iPhone 13 Pro Max are minimal in terms of design. Both Apple flagships have a stainless steel frame with flat edges and Gorilla Glass on the back. You will also find the camera system installed in the rectangle, which looks like that of the iPhone 12 Pro and iPhone 12 Pro Max . Even the color variations are identical for the two 13-series models. You can get them in:

The most noticeable visible difference in design is the size. The Pro Max is 14.1 millimeters higher and 6.6 millimeters wider than the standard Pro version. As a result, the iPhone 13 Pro Max is also 36 grams heavier than its little brother at 240 grams.

Technically, the displays of the two smartphones are identical; they only differ in their size. The iPhone 13 Pro’s screen is 6.1 inches, while the Pro Max’s is 6.7 inches. Both displays use OLED panels with HDR 10, Dolby Vision, and 1000 nits of brightness.

In addition, both displays of the Pro models have a refresh rate of 120 Hertz with ProMotion. In this case, ProMotion means that the frame rate adapts dynamically, depending on what you are looking at. With video games, it can be 120 Hertz, with photos. For example, the iPhones can throttle the frames per second down to up to 10 to save battery.

Apple specifies the maximum resolution of the displays as Full HD Plus. Both come out at around 460 pixels per inch, so the image looks equally sharp on both iPhones.

Performance: The A15 Bionic Chip Is Damn Fast

Apple’s latest high-performance chip, the A15 Bionic, works inside the two iPhones. According to the manufacturer, this is more than 50 percent faster than the mobile processors of the competition and, therefore, also the fastest on the market. In GeekBench 5 and Antutu 9, the A15 Bionic does better than the Snapdragon 888, installed in many current Android smartphones. However, the iPhones did not achieve the promised 50 percent more performance in the tests.

Apple does not officially announce how much RAM is built into the iPhones. According to rumors, the iPhone 13 Pro and 13 Pro Max should have 6 GB of RAM. That would be a little less than comparable high-end smartphones from Samsung or Xiaomi, but the Apple processors are known to work efficiently, which is why this should not throttle the two iPhones. Both models also have 5G connectivity.

You also get the same package for the video functions with both 13-series models. Both have the so-called cinema mode. This allows you to move the focus point during the recording so that the background becomes blurred. With it, you create some films and clips that are well worth seeing. 4K resolution videos are reserved for the iPhone 13 Pro and Pro Max versions with 256 GB of storage or more.

Apple also does not provide any official information on the size of the battery. However, the battery of the iPhone 13 Pro Max should be slightly larger than that of the iPhone 13 Pro. That makes perfect sense, as there is more space in the more significant case. This is, of course, also expressed in the runtime of the two models. According to Apple, you can play up to 22 hours of video with the iPhone 13 Pro, while you can watch up to 28 hours with one charge with the 13 Pro Max.

With a 20-watt power adapter from Apple, you can use the manufacturer’s fast-charging technology on both iPhones. Older chargers with 5 watts, for example, also work with the new cell phones. You can wirelessly charge the smartphones with up to 15 watts with MagSafe technology or 7.5 watts with Qi chargers.